Posted by Nick Gilmore in Virginia's News on February 20, 2019 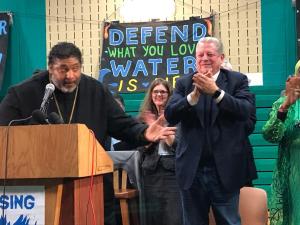 It was a combination protest, spiritual revival and celebration as about 800 people packed the gym at a middle school in Buckingham County last night to hear from environmental activist Al Gore and political activist William Barber. They had come to oppose the Atlantic Coast Pipeline and construction of a massive compressor station in the historic black community called Union Hill. Sandy Hausman was there and filed this report.