Posted by Nick Gilmore in Virginia's News on September 27, 2016

Posted by Nick Gilmore in Virginia's News on August 31, 2016 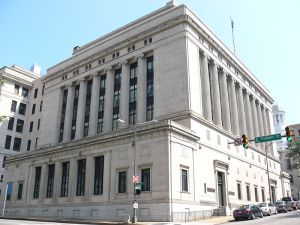 Republican leaders in the General Assembly say the Virginia Supreme Court should hold Democratic Governor Terry McAuliffe in contempt of court for his action to restore voting rights to former felons. Michael Pope has the story.

Posted by Payton Knobeloch in Virginia's News on August 1, 2016

Elections officials across Virginia are about to cast aside thousands of voters in the wake of a Virginia Supreme Court decision last month. It’s the latest in an ongoing drama that could have drastic consequences on Election Day. Michael Pope has the story.

Posted by Payton Knobeloch in Virginia's News on July 29, 2016

The Virginia Supreme Court may have overturned Democratic Governor Terry McAuliffe’s executive order restoring voting rights to 200,000 former felons. But as Michael Pope reports, that’s not stopping him from moving forward with the plan.

Virginia’s governor ignited a small firestorm at the Democratic National Convention when he told a reporter that Hillary Clinton would support the Trans Pacific Trade agreement or TPP. Terry McAuliffe said Clinton would insist on some changes to address the concerns of supporters of Bernie Sanders, but she had earlier said she’d oppose the deal. Sandy Hausman reports on what came next.

Virginia’s Supreme Court is expected to rule soon on whether Governor Terry McAuliffe acted constitutionally when he restored voting rights for more than 200,000 ex-felons who had served their time in prison and on parole. Sandy Hausman talked to one man who is hoping the court backs McAuliffe.

Posted by Payton Knobeloch in Virginia's News on July 19, 2016

Members of the Virginia Supreme Court are considering a challenge to Democratic Governor Terry McAuliffe’s executive order restoring voting rights to more than two hundred thousand former felons. Michael Pope is at the Supreme Court with the latest.

Not All Felons Want to Vote: A Community Worn Down by Politics

Posted by Payton Knobeloch in Virginia's News on July 13, 2016

Virginia’s Governor made national headlines in April, when he restored voting rights to more than 200,000 ex-felons. But the backlash was quick and fierce. Republicans accused the Governor of misusing his power to sway presidential politics. Reports revealed rapists and murderers still in prison, whose rights had been restored, accidentally.

Since then, the debate has ramped up. But stuck in the middle are thousands of Virginians — not all of whom are excited to vote. Mallory Noe-Payne has this story, of a community worn down by politics.

Posted by Payton Knobeloch in Virginia's News on June 30, 2016

This week, Democratic Governor Terry McAuliffe issued yet another executive order, this time to bypass the General Assembly and take a look at ways the commonwealth can respond to climate change. It’s the latest example of a governor who has increasingly taken to using executive power to accomplish his agenda, a trend that’s causing alarm among Republican leaders in the General Assembly. Michael Pope has the story.