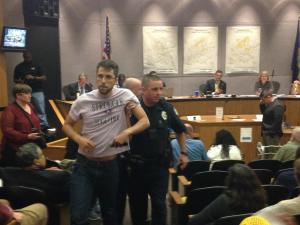 Several people were ejected during a public hearing at Charlottesville’s city hall, before members voted to change the names of Lee and Jackson Parks.

A meeting of Charlottesville’s city council began with a squabble but ended with surprising solidarity.  Sandy Hausman reports that members voted unanimously for new names to replace Lee and Jackson Parks.

This entry was posted on June 9, 2017, 2:39 pm and is filed under Virginia's News. You can follow any responses to this entry through RSS 2.0. You can leave a response, or trackback from your own site.