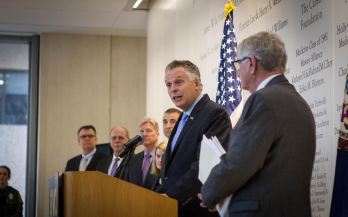 It’s a budget year in Virginia — meaning during this year’s legislative session the Governor and General Assembly will work to craft how the state spends its money for the next two years. Governor Terry McAuliffe won’t reveal his proposed budget until next week, but Wednesday in Richmond he did announce a plan to issue two-and-a-half billion dollars in bonds. Money from those bond sales will largely go to the state’s colleges. Mallory Noe-Payne reports.

This entry was posted on December 9, 2015, 4:39 pm and is filed under Virginia, Virginia's News. You can follow any responses to this entry through RSS 2.0. You can leave a response, or trackback from your own site.