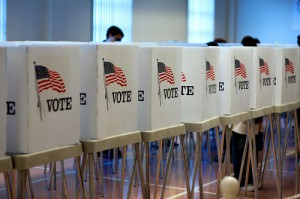 This Election Day voters are deciding which party will run the Virginia Senate for the next four years. Republicans hold a 21-to-19 majority but Democrats can take control by gaining one seat since they have the tiebreaking  vote in the person of Lieutenant Governor Ralph Northam. With Republicans likely to maintain a large majority in the House of Delegates and Democrat Terry McAuliffe sitting in the governor’s mansion today’s outcome in the senate will have enormous implications for the direction of state government in the immediate future. More now from Fred Echols.

This entry was posted on November 2, 2015, 4:55 pm and is filed under Virginia's News. You can follow any responses to this entry through RSS 2.0. You can leave a response, or trackback from your own site.