Gillespie Holding Out for a Red Virginia 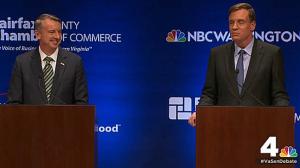 Election night was a nail-biter for incumbent Democratic U.S. Senator Mark Warner, who had been expected to coast to victory. His badly outspent Republican challenger, Ed Gillespie, defied ALL of the polls leading up to election day—and took the lead throughout the evening until Fairfax County’s vote totals were finally reported. As Anne Marie Morgan reports, the wave that swept Republicans into the majority in the U.S. Senate nearly engulfed Virginia.

This entry was posted on November 5, 2014, 7:50 am and is filed under Virginia's News. You can follow any responses to this entry through RSS 2.0. You can leave a response, or trackback from your own site.