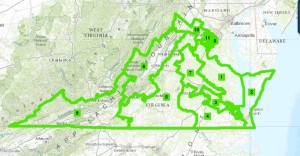 Accused of unconstitutional gerrymandering, Virginia’s General Assembly was told last week by a federal district court in Richmond that it must redraw its Congressional map next year because too many black voters are “packed” into one majority-minority district.  But state lawmakers could actually avoid a contentious debate and not address the issue at all during their next session. As Virginia Public Radio’s Tommie McNeil reports, it is possible.

This entry was posted on October 10, 2014, 5:00 pm and is filed under Daily Capitol News Updates. You can follow any responses to this entry through RSS 2.0. You can leave a response, or trackback from your own site.