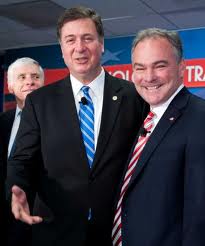 The U. S. Senate race in Virginia is heating up.

In last week’s Virginia Senate debate Kaine made it appear he favors placing an income tax on the 47%  of Americans who currently don’t pay one. The Allen Campaign hasn’t had many openings in this race, so it pounced on the remark with this new ad.

“Tax hikes for anyone earning as little as $17,000 a year and now: ‘I would be open to a proposal that would have some minimum tax level for everyone.’ Tim Kaine: raising taxes on everyone.”

Kaine was quick to distance himself from the comment… explaining he was merely saying he’s open to debating different tax proposals. Fact checking website Politifact was quick to label Allen’s new ad ‘false,’ which Kaine says is telling.

“Yet the Allen Campaign, for their own reasons, has decided, ‘we’ll run a knowingly false ad anyway.’ I know Virginia voters pretty well and I just don’t think that’s what they want to see.”

With negative ads flying in Virginia and voters trying to weed through the competing claims, analysts expect the race to go down to the wire.

This entry was posted on September 26, 2012, 10:23 am and is filed under Daily Capitol News Updates, Virginia's News. You can follow any responses to this entry through RSS 2.0. You can leave a response, or trackback from your own site.