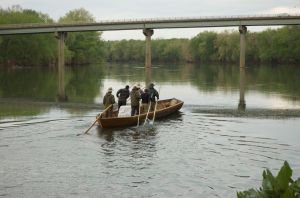 This year marks the 200th  anniversary of the Marshall Expedition, an important event in the history of Virginia commerce.

Andrew Shaw and his six-man crew from Lynchburg are setting out to re-trace the expedition in a flat bottomed boat, called a batteau.  They worked together to build the 43-foot wooden boat that will carry them up nearly 360 miles of waterway. They’ll travel up the James River from Richmond, through the Allegheny Mountains, and downriver to the Great Falls of the Kanawha in West Virginia.

Roger Nelson, President of the Virginia Canals and Navigations Society, says the survey was done in support of George Washington’s plan for westward expansion. “That was his vision, to build this canal system that linked the Eastern Seaboard with the Mississippi River Valley. He could envision the riches that lay out there,” says Nelson.

John Marshall and his crew of about a dozen commissioners journeyed up the James River and through the mountains to see if this canal system could actually be completed.  They made their month-long voyage with a boat designed just for the task– a batteau.  Poling the boat up and down the river, the crew essentially transformed the Piedmont from a rough frontier to a thriving agricultural region.

Today’s crew will primarily use the tools of Marshall’s time, spending much of their journey upstream, through rocks, swift water and rapids. To follow the progress of the Mary Marshall and her crew, you can check out their blog at vacanals.org/marshall.

This entry was posted on February 12, 2012, 4:35 pm and is filed under Spotlight on WVTF Public Radio 2012, Virginia's News. You can follow any responses to this entry through RSS 2.0. Both comments and pings are currently closed.