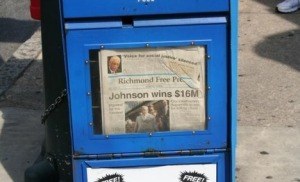 In the age of blogs, Twitter and Facebook, Americans seemingly have endless options to express their views. But that doesn’t mean those opinions are welcomed. the burning of Richmond Free Press newspapers this fall didn’t just damage private property— it also infringed on the paper’s rights to free expression.

Publisher Ray Boone says efforts to stifle the paper’s progressive views have occurred for 20 years. His newspaper boxes have been run over and papers shredded. Businesses have refused to allow his boxes outside their doors. No single person or group appears to be responsible. But Boone says historically, black papers have been banned and the community has been deprived of access to information, and that battle is still not won.

“ A major test of a nation’s freedom is the degree of liberty that the people have to speak, write and publish. Based on that premise Richmond does miserably and the national generally flunks,” said Boone.

No one has been charged with burning the papers. The Virginia ACLU’s Rebecca Glenberg said regardless of the motive, the vandal limited the paper’s voice and prevented readers from hearing those views and information.

This entry was posted on December 19, 2011, 3:51 pm and is filed under Daily Capitol News Updates. You can follow any responses to this entry through RSS 2.0. Both comments and pings are currently closed.